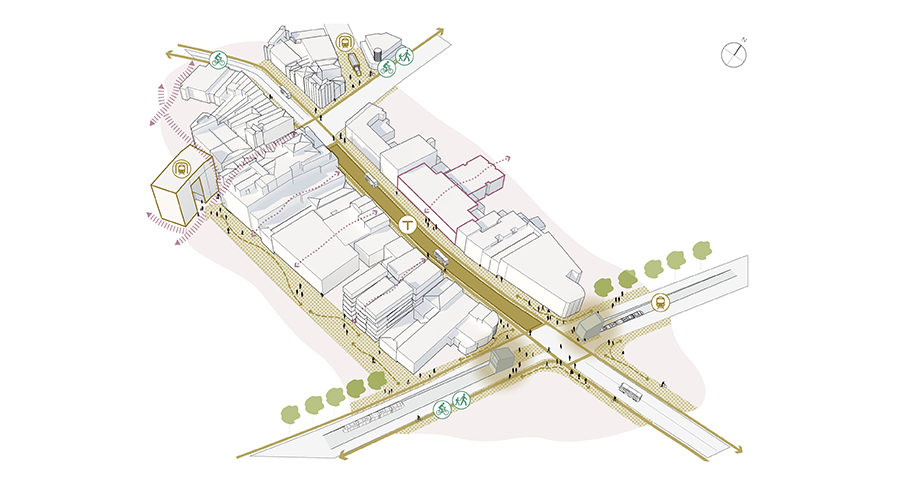 Already experiencing rapid change, with two City Rail Link (CRL) station entrances on the way and the prospect of future light rail, mixed use re-development in this heritage-rich neighbourhood will become supercharged.

The City Centre Masterplan anticipates the significant place-shaping potential of these future changes with the Transformational move 5: Transit oriented development.

Why we're doing this

A comprehensive and strategic approach to transit-oriented development and pedestrian-priority streets and public spaces are needed to realise the full place-shaping potential of urban development and growth in response to the investment in public transport.

How this would happen

The Karangahape Road Area Plan 2014-2044 provides direction on a number of key public realm and development opportunities which should be pursued in the future.

Additionally, the masterplan envisages opportunities to achieve the following outcomes associated with the planned investment in transport and development:

A future underpass light rail station at Karangahape Road and Queen Street with an architectural form and identity that is distinctly Tāmaki Makaurau.

The underpass station will link seamlessly with a a new landmark pedestrian plaza above that celebrates the theatre of people coming and going from what will become a significant new city centre gateway for Auckland.

Potential opportunity under Access for Everyone (A4E) to transition the central blocks of Karangahape Road to a transit street in the future, prioritising walking, cycling and bus services and responding to the significant increase in pedestrian volumes and transit access, once both light rail and CRL are in place.

A significant increase in mixed-use developments unlocked by the transit investment, both directly above the CRL station on Mercury Lane and on private sites with development potential throughout the precinct.

Evolution of Cross Street to become a recognisable second street to the precinct, benefiting from increased foot traffic from direct, flat and accessible connections from both CRL and LRT stations, and a growing network of through-building links back to Karangahape Road.

Back streets and laneways

Further changes to the network of back streets and laneways back from Karangahape Road in response to the transit investment and increasing mixed-use development.

Potential closure of the Symonds Street motorway on-ramp to aid with optimising Karangahape Road for people and transit.